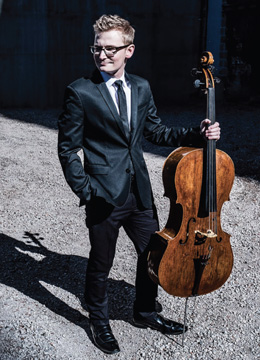 Having already performed as a soloist with the Houston Symphony and the Boston Pops, ALEXANDER HERSH has quickly established himself as one of the most exciting and creative talents of his generation.

He has received top prizes at competitions worldwide including the 2022 Pro Musicis International Award (entitling him to a recital at Carnegie Hall), Salon de Virtuosi Career Grant, New York International Artists Association Competition, and the Fischoff National Chamber Music Competition, among many others. A passionate chamber musician, Alex has performed at music festivals worldwide including Marlboro and Ravinia. Raised in Chicago, Alex began playing the cello at age 5.

He received his B.M. and M.M from the New England Conservatory. Later he was recipient of the Frank Huntington Beebe fund for studies in Berlin where he studied at the Hanns Eisler Hochschule for Music. His teachers have included Laurence Lesser, Hans Jorgen Jensen, Kim Kashkashian and Paul Katz. He serves as co-Artistic Director of NEXUS Chamber Music, an artist driven collective of musicians whose mission is to make classical music culturally relevant through live concerts and multimedia content. He plays a G.B. Rogeri cello, courtesy of Guarneri Hall NFP and Darnton & Hersh Fine Violins.

Alex will play the marvelous, but often neglected, Concerto No. 2 by Victor Herbert and the Strings will add works by African-American composer George Walker, Charles Ives and Aaron Copland.

“Dear Larry–How ever do you find these young artists that are so very special…H.P. Strings is such a gift
for our community.”
– Rhoda K. Levine